The maritime/river transports represent the most important segment of the world total transports as they cover, according to latest data, 89.6% in volume terms and 70.1% in value terms of the global total. Moreover, they have the advantage of not only being cheaper but also of being less polluting per freight tonne as compared to all the other transport modalities.

Within this business, an important role is played by the mandatory passage points represented (from east to west) by: the Strait of Malacca, the Strait of Hormuz, the Bab-el-Mandeb, the Suez Canal, Bosporus, Gibraltar, the Panama Canal to which we could add the Cape of Good Hope. 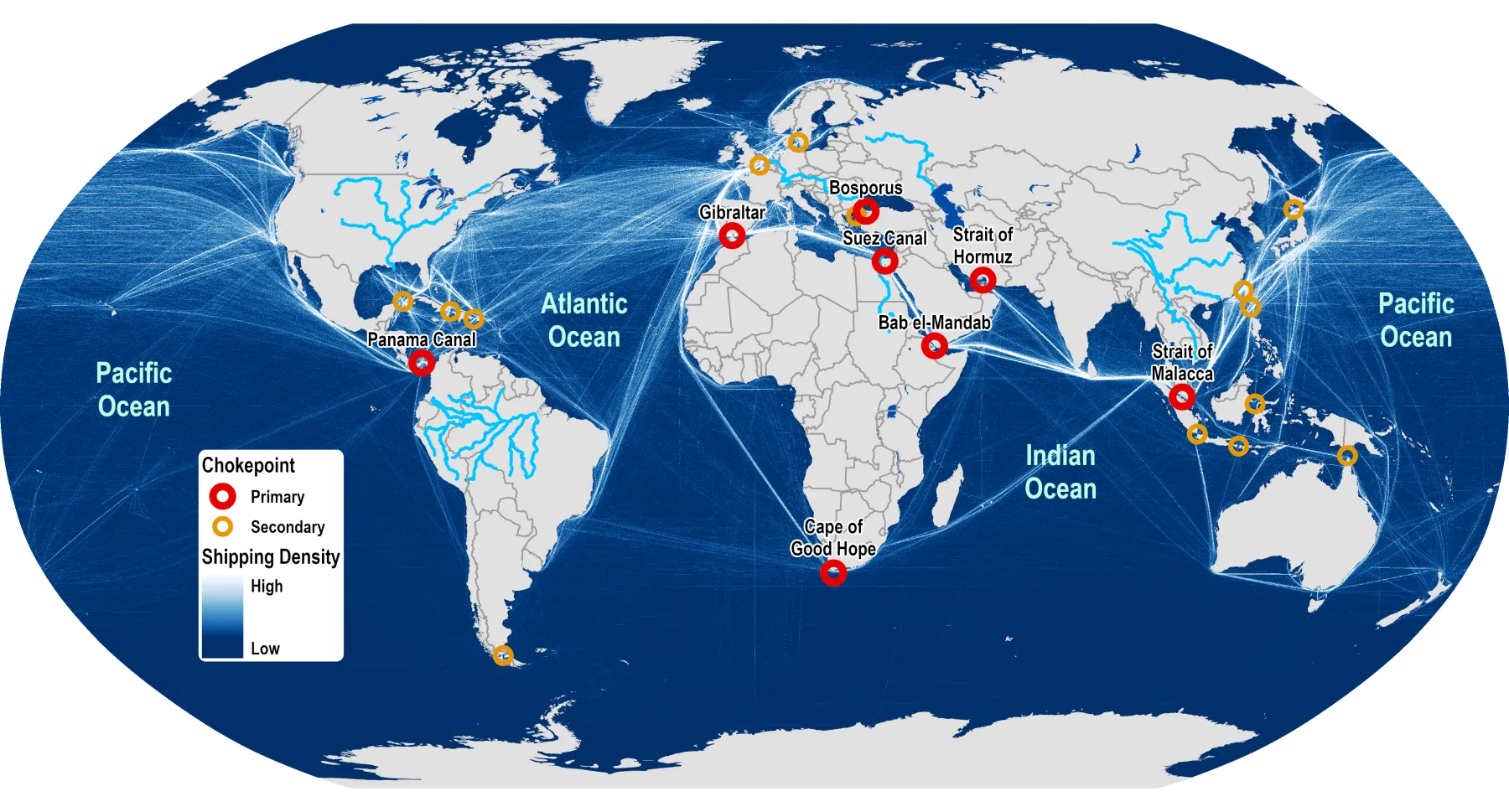 The recent incident of March 23rd, represented by the blockage of the Suez Canal brought again to the international attention the issue of the safety of the maritime transports especially at the mandatory passage points.

The potential threats for the safety of transiting the Suez Canal are often emphasized as results of the materialization of certain adverse scenarios. Most often “played” scenarios refer to terrorist attacks which could provoke major disruptions in various fields, especially economic.

The indigenous incidents (threats) are not as “attractive” for the public opinion. Although their occurrence is more likely, such accidents are much less analyzed as far as implications are concerned.

The Suez Canal in a nutshell: 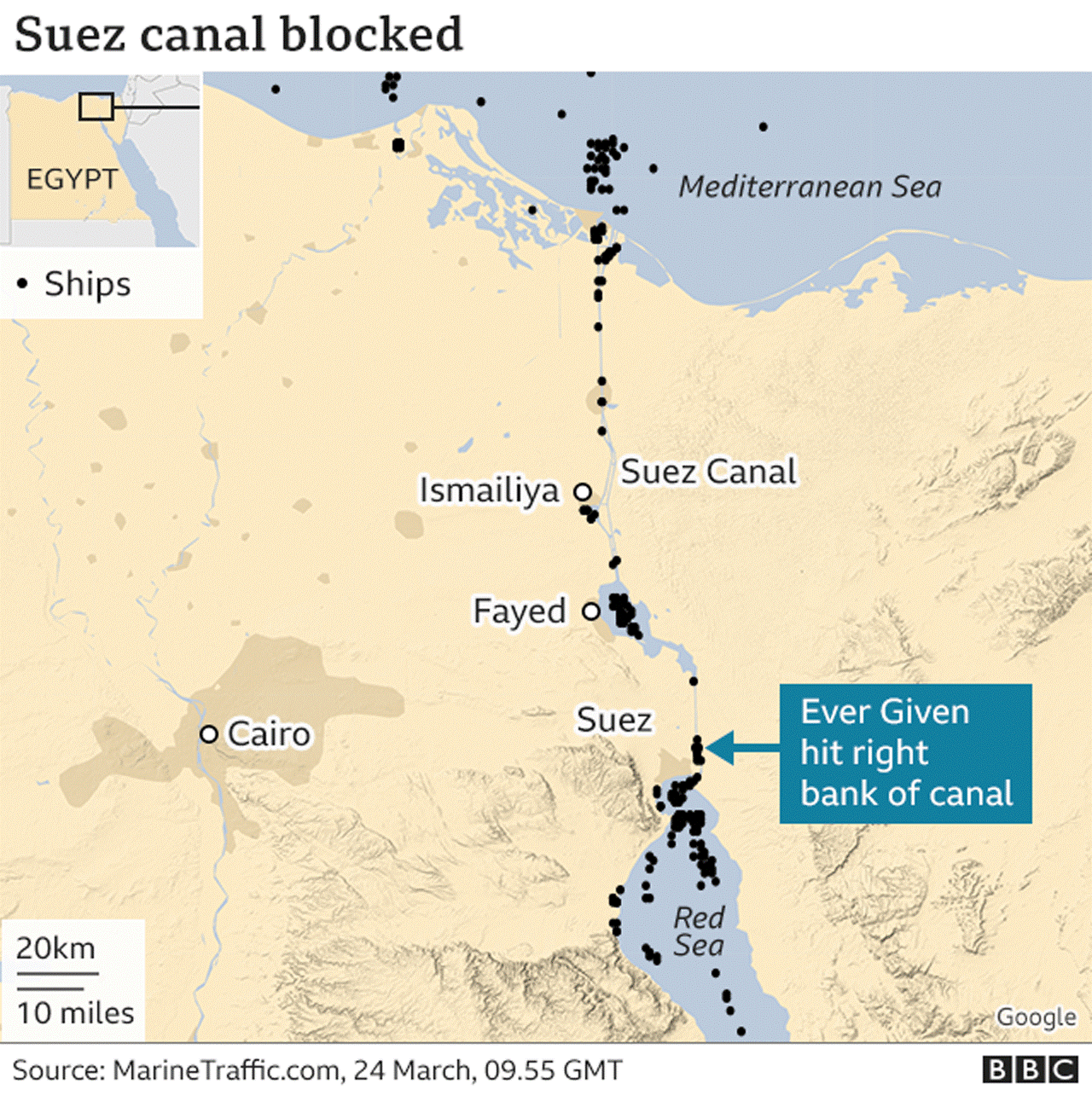 The German insurance company Allianz estimated that the blockage of the Suez Canal could diminish the yearly global growth by 0.2 – 0.4%.

The Wall Street Journal emphasized that as a result of the EverGiven incident, the cost of freight for the transportation ships between Asia and the Middle East increased by 47% mainly due to attempts of rerouting the ships in order to avoid the Suez Canal (i.e., adding around 8 navigation days).

Yet the temporary blockage of the Suez Canal affected not only the global maritime industry or the Egyptian economy but also innumerable other companies (corporate and retail end-users of transport services). Besides, the quality reports of the shipped goods have to be issued before the merchandises reach the end users (which are not a few having in mind the more than 18,000 containers aboard the blocked ship as well as the other trans containers on the ships (trans containers represent 28% of the Suez Canal transit).

It is likely that, having in mind the financial losses, the feasibility studies for commissioning the north route of maritime transports be speeded up, although some experts say that is not feasible and the Russian action of opening up the ice shelf with three submarines is more of a propaganda campaign than of an affordable possible solution.

The maritime containers shipment as part of the logistic global chains could add up to the already chaotic situation following the disruptions generated by the pandemic.


At the time of the impact between the EverGiven trans container ship and the shore of the Canal, the wind speed was approximately 40 knots/hour. It is possible that human piloting errors (?) or objective technical considerations be added to the unfavourable weather conditions.

The Suez Canal Authority mentioned that this would have not (!) been the only reason for which the ship remained blocked.

Many analysts of the incident (most of them experts in dealing with the risks attached to maritime transport strategic infrastructures) consider the need of a serious investigation leading to clear, worth trusting conclusions concerning the causes of the event.

Credible sources maintain that the Suez is known as “the Marlboro Country” and suggest that presents are being given to the piloting people.

The Canal is vulnerable to possible obstructions caused by transiting ships especially in some sectors such as:
The Canal is relatively vulnerable to terrorist actions in “the Suez Canal” Bridge area, known as the Egyptian-Japanese Friendship Bridge or in El Ferdan Railway Bridge but also in the waiting areas on the Timsah Lake and on the Great Bitter Lake.

Aspects of military and operative-intelligence security


The Suez Canal is one of the strongest defended strategical objectives in the world as part of the critical global transportation infrastructure. Few security events were witnessed so far (the most important were recorded in 2005 and 2009) which were quickly solved.

The 3rd Egyptian Army and the security services have as main missions securing the vessels’ safe passage of the 193 km long, 205 m wide and 24 m deep Canal and are controlling the vulnerabilities liable to be exploited by hostile forces.

The combination of the integrated high-technology equipment (Radars, VTMS and CCTV) and the combination army-intelligence and security services secure an appropriate protection of the objective.
The greatest security challenge comes from vessels transiting the Canal:
It is likely that the naval forces of the main states interested in streamlining the traffic through the Suez Canal in emergency situations to operationalise rapid interventions subunits in such crisis circumstances with effective intervention equipment for big ships (over 300,000 dwt) too. 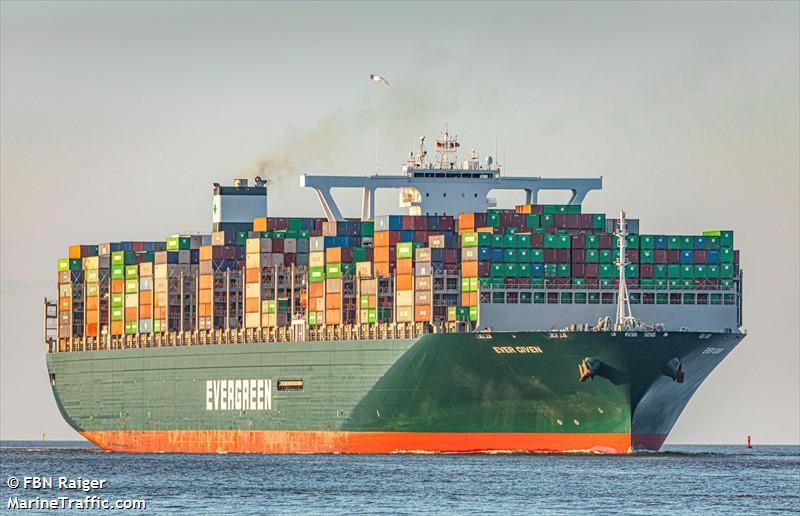 Admiral (ret) and ex-SACEUR James Stavridis’ controversial idea of setting up an international body for security management of the straits and navigation channels starts to make sense.

It makes sense too, that the intelligence and security services have and will have a bigger responsibility in the future as a result of the fact that the EverGiven giant ship is owned by a Japanese company, operated by a Taiwanese maritime shipping company and managed by a German company registered in Panama. And for everything being “easier to be managed”, all the 25 members of the crew are Indian nationals.

Setting up alternative routes (in the 1960s the US submitted the idea of launching construction of another canal as alternative to Suez) and Turkey is to start constructing in 2021 the Istanbul Canal. In our opinion, these are solutions, albeit incomplete ones.

As it is the case in all sectors, a greater concern for raising the education level could be a good solution which, unfortunately, requires a longer period of time.

At the same time a solution must also be found for safer operation in an infrastructure - sometimes from the middle of the 19th century, whit the ships of the 21st century.

The text was presented at the virtual international debate whit the same title, organized by Financial Intelligence of Romania on March 31st 2021. www.financialintelligence.ro
COLUMNISTS
CONNECT & FOLLOW